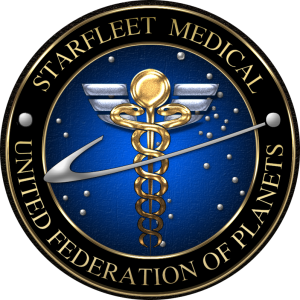 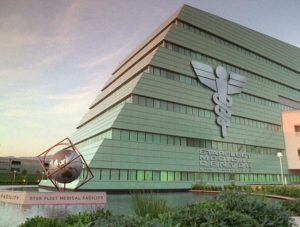 With a standard crew complement of 885, the Sovereign class USS Pharaoh keeps our medical staff very busy. Currently (2399), the Pharaoh consists of members from 23 different species, and this can often prove challenging to the staff who are tasked with keeping us all healthy. The anatomy and physiology of multiple species can prove challenging in times of medical emergencies, however all of the medical staff are expertly trained at Starfleet medical, and can cope with the challenges that travel amongst the stars can bring.

The Sovereign class USS Pharaoh is a state-of-the-art starship, and has all of Starfleet’s most up to date medical equipment. It also comes with the brand new LMH – Long-term Medical Hologram – which can be used anytime, and for any duration, and is available anywhere on board.

There are two main medical facilities aboard.  The main sickbay complex is a vast area located in the middle of deck 8 in the primary hull. It comprises a main bed area, operating rooms, intensive care and trauma units, specialist wards for particular requirements of non-humanoids, standard wards, office areas, waiting lounges, and drug storage. 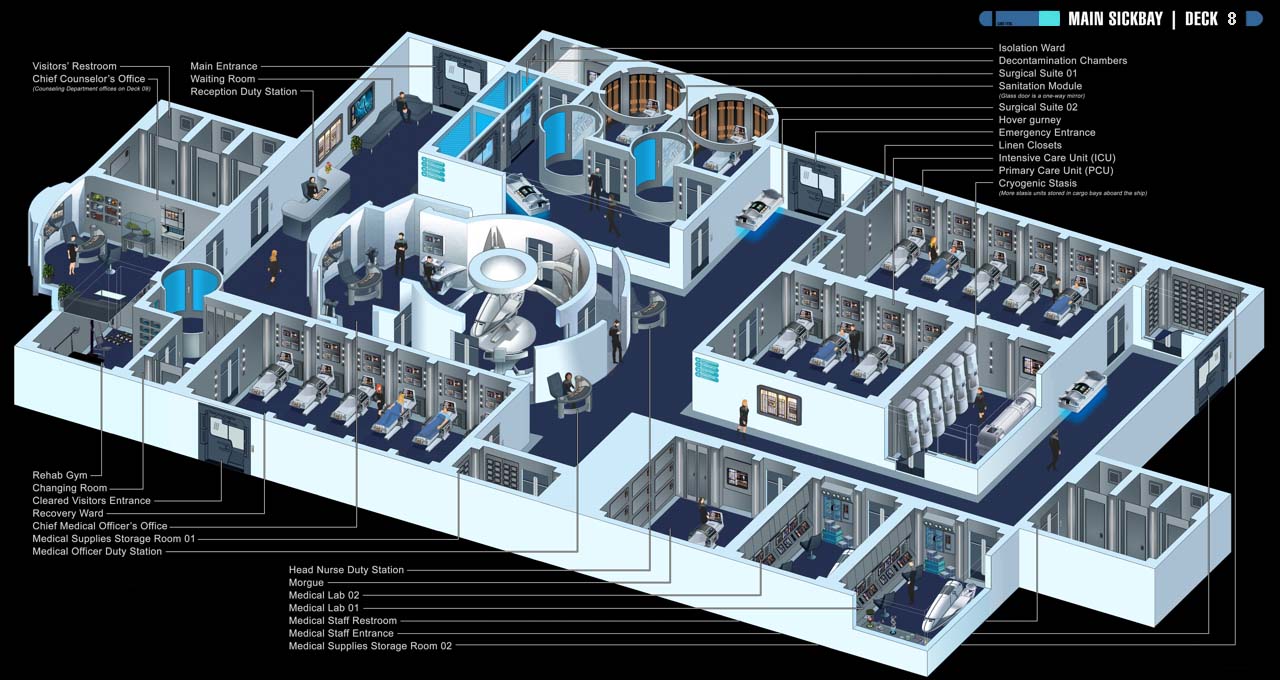 Above – Main sickbay complex on deck 8 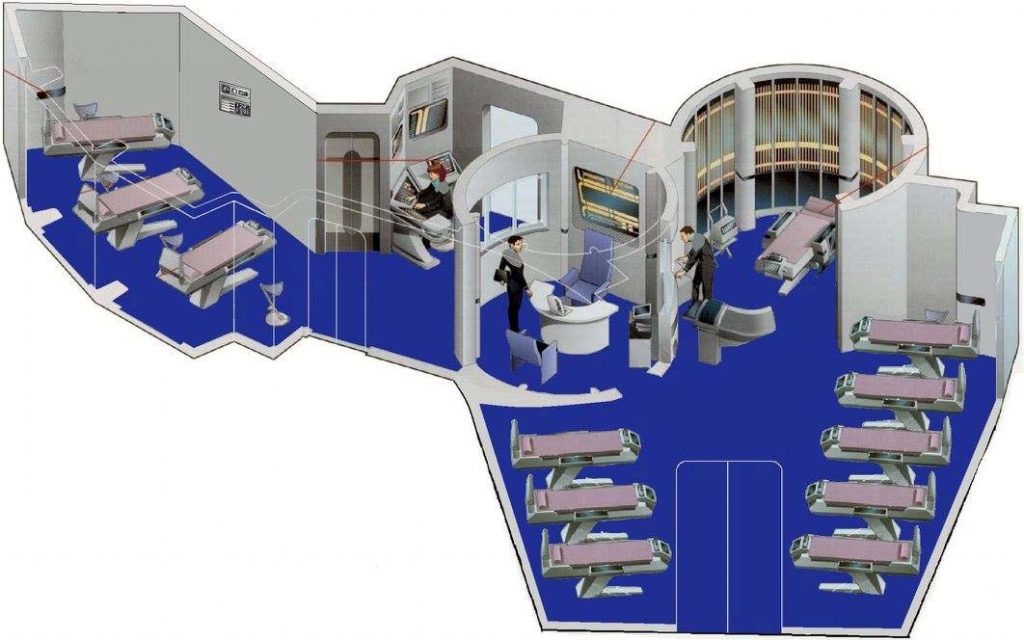 On deck 16 in the secondary hull, there is a backup for the main sickbay. Known as Auxiliary Sickbay, this facility is considerably smaller than the main sickbay on deck 8, but is well equipped nevertheless, and always manned by medical staff. 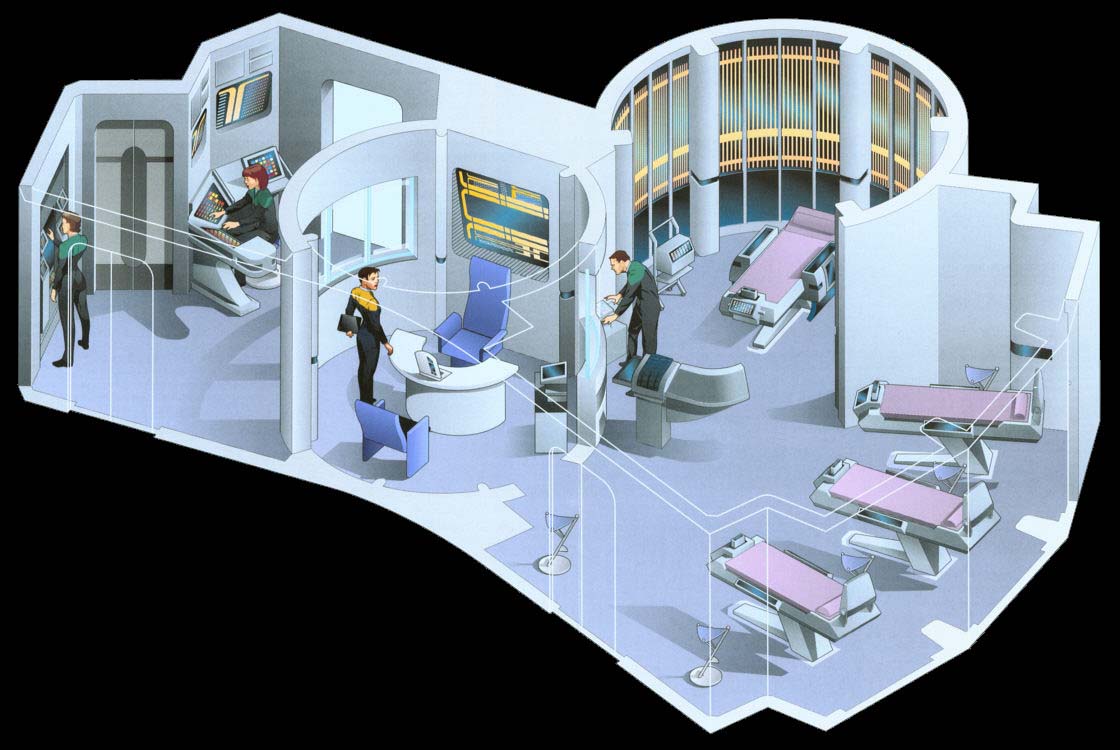 Above – Auxiliary sickbay on deck 16

Medical staff use a vast array of modern equipment to perform their duties. Here is a typical medical tray used across Starfleet medical facilities:

The main instrument used to “inject” drugs into patients is the hypospray: 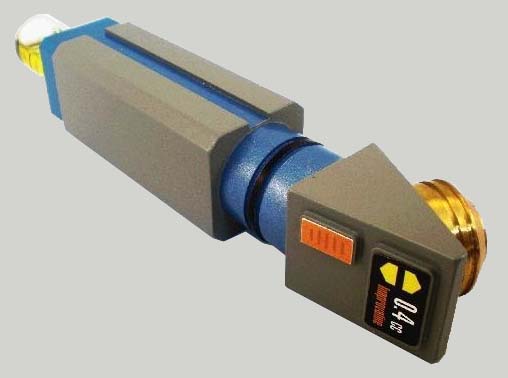 This uses an extremely fine and high-powered jet of air to inject the patient, and is very effective even through clothing, although for full effect, it should be administered directly to the bare skin.

To assist in making the correct diagnosis, medical staff possess medical tricorders which are considerably more effective than the standard tricorder, and come with a built-in extra med-scanner: 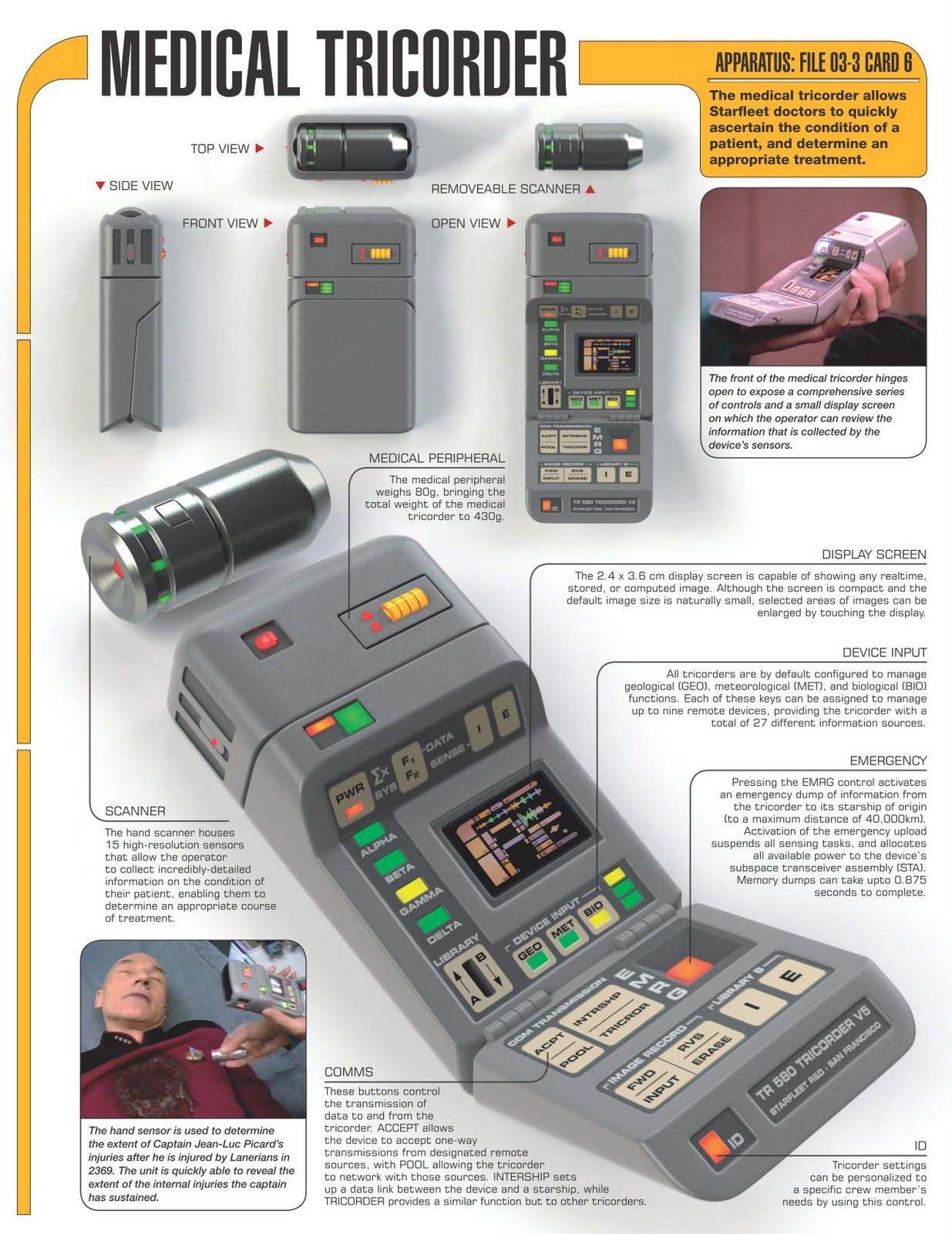 This multi-use device can diagnose virtually any medical condition, as well as performing all the functions of a standard tricorder.

During field trips, away team missions, and other assignments, medical staff carry a standard issue medical kit known as a Medkit or Medikit. These contain every device required to make a quick diagnosis, and they also have access to a few drugs used in standard emergency situations. Medkits are kept in all auxiliary craft, and also found around the ship: 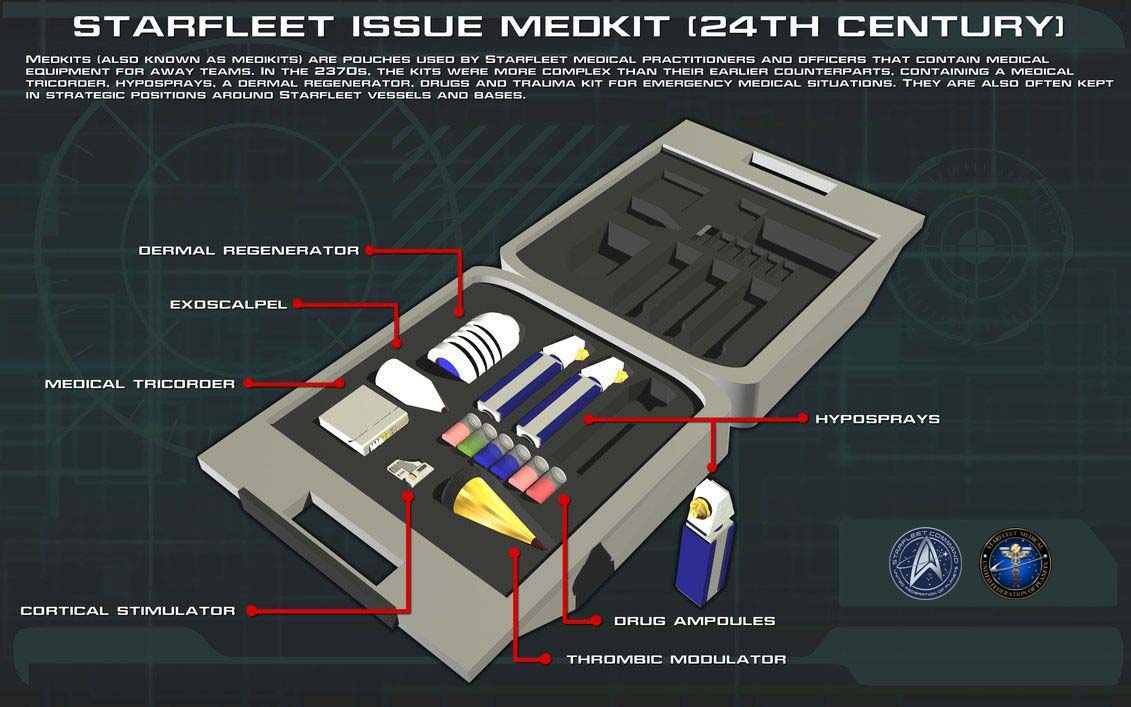 Dermal regenerators are very useful for cuts, lacerations, and other situations where the skin of a patient is torn or broken open. They can immediately repair the damaged area, healing the wound instantly: 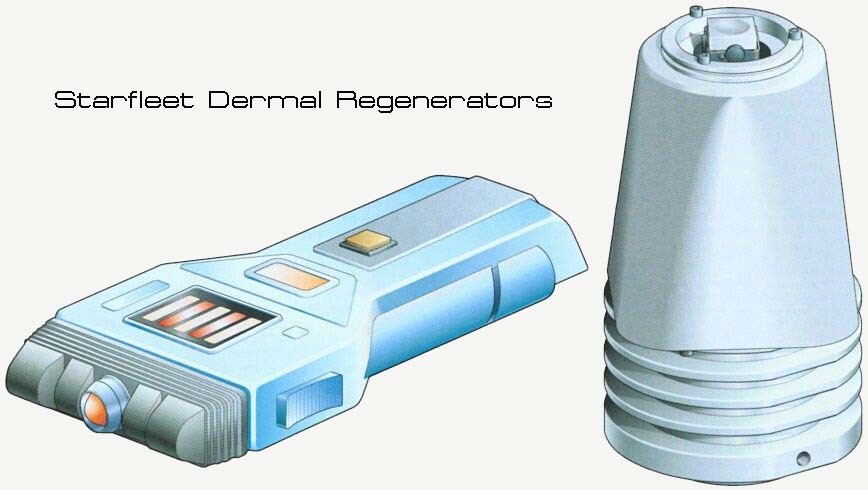 Also in both sickbays aboard is the hypospray loading station. This is where hyposprays are pre-programmed to deliver whatever drug and dosage of that drug that might be required for any medical situation. It enables medical staff to quickly access the full range of drugs available in Starfleet, and fine-tune the dose to any specific race, ensuring the patient receives exactly what they need in their condition: 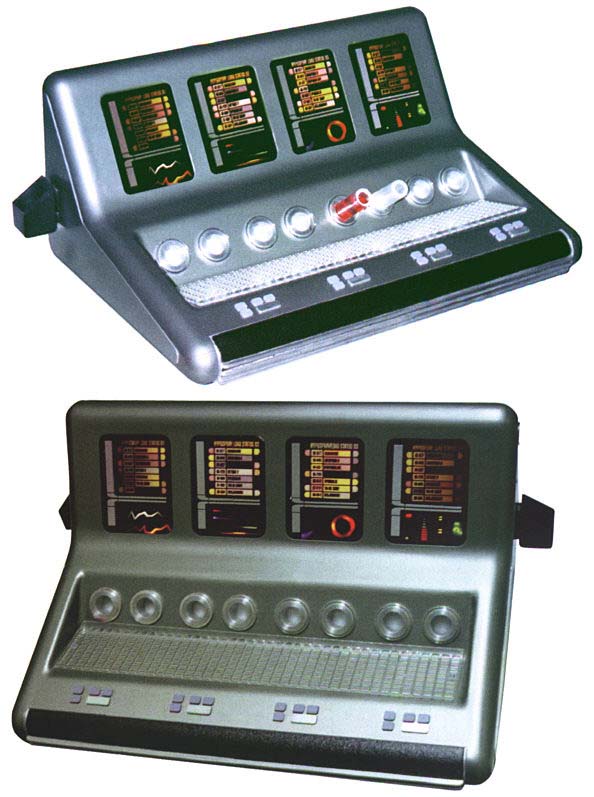 Starfleet Medical has access to a large array of drugs used to treat medical conditions of multiple species. Larger starships such as the Sovereign class carry most of these aboard, including many that are restricted and can only be administered by senior medical staff. The list is too long to show here, but this shows some of the main drugs in current use in Starfleet:

Asinolyathin: A pain reliever and muscle relaxant. It is used primarily to treat muscle spasms and pain from muscular injuries.
Bicaridine: A strong, addictive, pain reliever used to treat pain from traumatic injuries such as disruptor blasts. Is a known substitute for Metorapan.
Hydrocortilene: A pain reliever used primarily for cranial pains. A dose of 3% is sufficient for a mild headache, whereas increased doses were necessary for more debilitating injuries, such as concussion.
Metorapan: A formidable pain reliever used to treat more severe injuries. It is very similar to bicaridine, though without the risk of addiction. However it can cause fatal allergic reactions in around 1% of cases.
Morphenolog: A medication used primarily in the treatment for chronic pain. It can also be used in conjunction with other medications to reduce painful side effects.
Terakine: A pain relieving medication used to ease the pain from broken bones and similar injuries.
Triptacederine: A potent pain reliever used to aid with end-of-life pain. Another common application of the drug can be to ease the discomfort caused by malfunctioning cybernetic implants.

Anesthizine: A fast-acting anesthetic typically deployed in a gaseous form. It was considered to be one of the best in use by the Federation.
Anetrizine: A local anesthetic deployed through a hypospray, typically used to numb specific nerves to remove sensation and induce paralysis.
Axonol: A gaseous anesthetic authorised for use by the Federation as a crowd-control measure.
Neurozine: A gaseous anesthetic that was fast acting and could be dispensed through the typical environmental control systems on a Federation Starship.

Dermaline: A drug typically administered as a pre-emptive injection when there was a risk of exposure to high level UV radiation.
Dermaline Gel: A thick white gel made from dermaline compounds that could be used to soothe and treat first and second degree burns.
Kelotane: A drug typically administered via hypospray that was used to treat severe burns that were caused by high levels of harmful radiation.

Alkysine: A drug that was used to reduce the damage caused to neurological tissue following the event of a catastrophic injury.
Cortical Analeptic: A type of drug administered via hypospray to reinvigorate tissue within the cerebral and motor cortex following disruptions to the neural functions.
Synaptizine: A drug used to treat neuroleptic shock.
Theragen Derivative: A compound that could be used to deaden nerve inputs into the brain, resulting in a calming effect on the patient and a reduction in emotions such as anxiety, stress and aggression.
Trianoline: A medicine used to help patients with percussive injuries in small doses; 0.4ccs was sufficient for a concussion.
Vertazine: A drug used for to aid recovery from severe dizziness and vertigo.

Arithrazine: A medication used in extreme cases of theta radiation poisoning. It could also serve in the form of an inoculation. A medical officer was required to monitor a patient receiving arithrazine during treatment according to Starfleet medical protocol.
Analeptic Compound: A compound used to counter the detrimental effects of certain types of radiation, including theta radiation.
Hyronalin: A drug used to counter the effects of radiation poisoning. These effects can be enhanced when combined with lectrazine.

Alcohol: A chemical that acted as a psychoactive drug with intoxicating effects when consumed, known to be addictive and to possibly result in poisoning when consumed in high quantities. It could also be used as a disinfectant and as an antiseptic gel.
Caffeine: A stimulant consumed in a variety of foods and beverages. If consumed regularly, it could become addictive, along with causing side effects such as insomnia, gastrointestinal distress and hypertension.
Felicium: An addictive narcotic that granted the user a euphoric sensation with both pain-relieving and sedative side effects. Serious withdrawal symptoms tended to occur within 72 hours.
Impedrezene: A narcotic that slowed down higher brain functions and affected motor function. Extreme headaches were commonly found when the effects wore off.
Ketracel-White: An addictive narcotic given to Jem’Hadar soldiers by the Dominion to provide an essential enzyme, as well as all the nutrients they required to survive.
Synthehol: A chemical that replicates the properties of alcohol, without the effects of intoxication, addiction, or poisoning.
Triglobulin: A drug used by some species as an aphrodisiac, though also had an application to aid in the facilitation of vaccinations and medicines.

Benzocyatizine: A medication used to treat low isoboramine levels in Trill, which regulated the connection between symbiont and host.
Cervaline: A drug used to limit rejection of transplanted organs or tissue.
Dylovene: An antitoxin carried as standard in Starfleet medkits
Mirazine: A drug used to reduce the time necessary for decompression when boarding and leaving starships.
Priaxate: A drug used to lessen the symptoms of plague.
Stokaline: A multivitamin drug administered via injection.
Tesokine: A drug used to facilitate cross-species surrogacy.