Duty shifts aboard Federation starships can vary from eventless to chaotic, and the crew require plenty of recreation and relaxation time between their working hours. Ships such as the Sovereign class are easily large enough to accommodate areas dedicated to these ends. Along with holodecks, there are several mess halls scattered throughout the Pharaoh, including a large mess hall & lounge on deck 23 (the largest on the ship), a rear-facing mess hall on deck 18, another large mess hall on deck 11, and of course our Ten Forward lounge at the front of the ship on deck 10. On deck 2 is an officer’s lounge, which is used primarily by the bridge crew, but can be accessed by any member of the crew who holds an officer grade (i.e. Ensign or above). We call this the Starlight Lounge, so named because of its panoramic windows (to the extreme right of the image below): 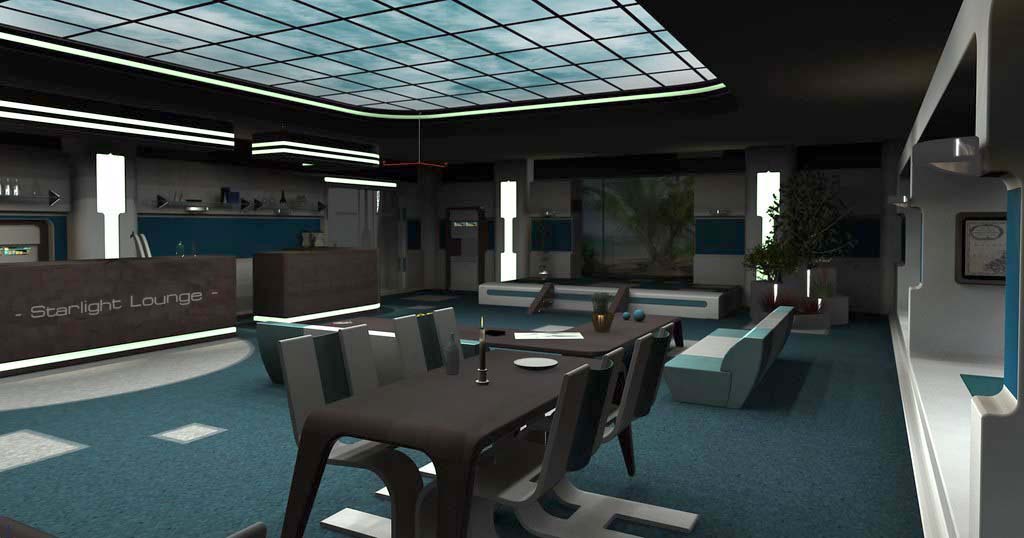 This is a small lounge that supplies drinks and snacks for crew during their breaks, but can also accommodate crew who are between shifts. Along with Ten Forward, the Starlight Lounge affords spectacular views of the space ahead of the ship, and is a popular area for a lot of the crew. The two images below show the panoramic windows, which face the front of the ship:

Opposite the entrance doors, there is a meditation area that can be used to listen to relaxing music, or simply meditate (another replicator can be seen to the left):

There is a bar area where crew can mix drinks to their own taste, and use replicators to create snacks unique to their culture or tastes. In addition to replicators, there are many choices of “real” (non-replicated) snacks and drinks available here:

This next view is of the main entrance/exit doors, which lead to/from deck 2.  Also visible to the far right is a drinks dispenser, and a control panel for lighting, music and other conditions which can alter the ambience of the whole room:

Many of the duty bridge crew meet here to relax, unwind, and refresh themselves, either during shift breaks, or at the end/beginning of a duty shift, and some come here simply to enjoy the views from the windows, read, listen to music, or to meditate. Along with Ten Forward, the Starlight Lounge is one of the most popular places on the ship to unwind.

[Revised 4.2399 – with thanks to Mark Rademaker and Robin Hiert for kind permission to use these images]