The security department of any Federation starship has multiple roles, first and foremost of course is the safety of the ship and her crew. Exploration into unknown areas of the galaxy will inevitably bring Starfleet into contact with races who do not share our sense of pushing the boundaries of contact and peace, and some of those races, as we’ve learnt in the past, will be openly hostile. This is why all modern starships must be able to defend themselves and protect Federation citizens, planets, outposts and vessels, even though their main purpose is exploration.

There are 178 security personnel aboard the Pharaoh, directed by a Chief of Security who is ably supported by a deputy. Across the ship the security personnel must make regular patrols, as well as undergo constant physical combat training, weapons use (both ship and handheld), ship tactical maneuvering, monitoring of the brigs, using internal sensors to detect anyone or anything as required, inventory checks on torpedoes, and to support the senior staff in the day-to-day running of a crew of 885.

Holding cells, known as “brigs” are located on decks 8 and 20. The main brig is located in the security complex on deck 8, and is capable of holding multiple persons in cells, which can be changed to suit different life-forms. The smaller brig on deck 20 is also accompanied by another armory, and both are manned throughout all duty shifts.

The main security complex has all sorts of facilities used by and for the security teams, including a central security room, small security training holodecks, multiple brig cells, a forensics room, two armories, and the offices of the Chief of Security and deputy. 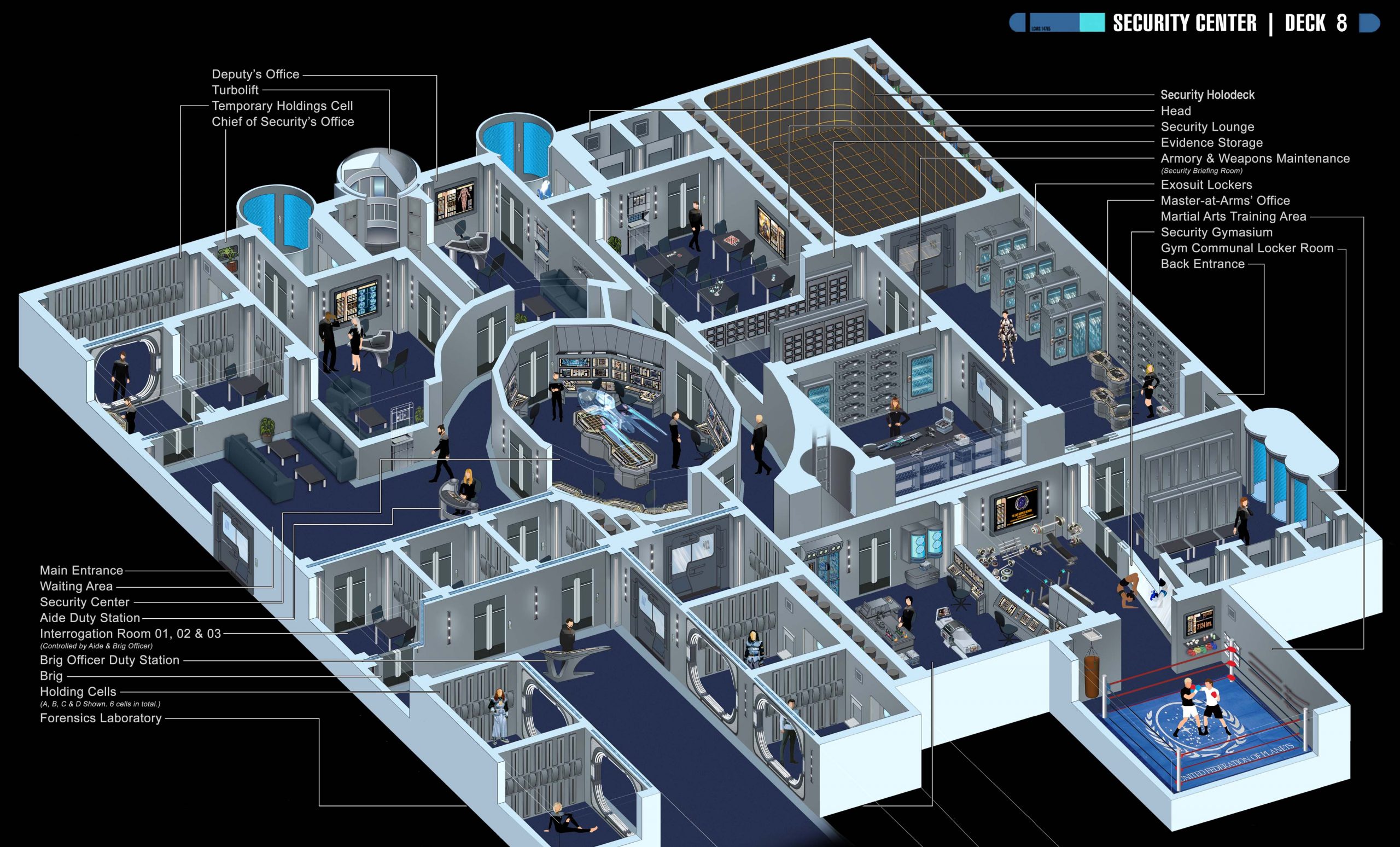 Above – main security complex on deck 8

Although there is a small training holodeck within the deck 8 complex, the main ship phaser range is found on deck 10. This is a much larger area, which can be programmed for multiple training sessions, as well holodeck-style fictional scenarios where security personnel can hone their skills. 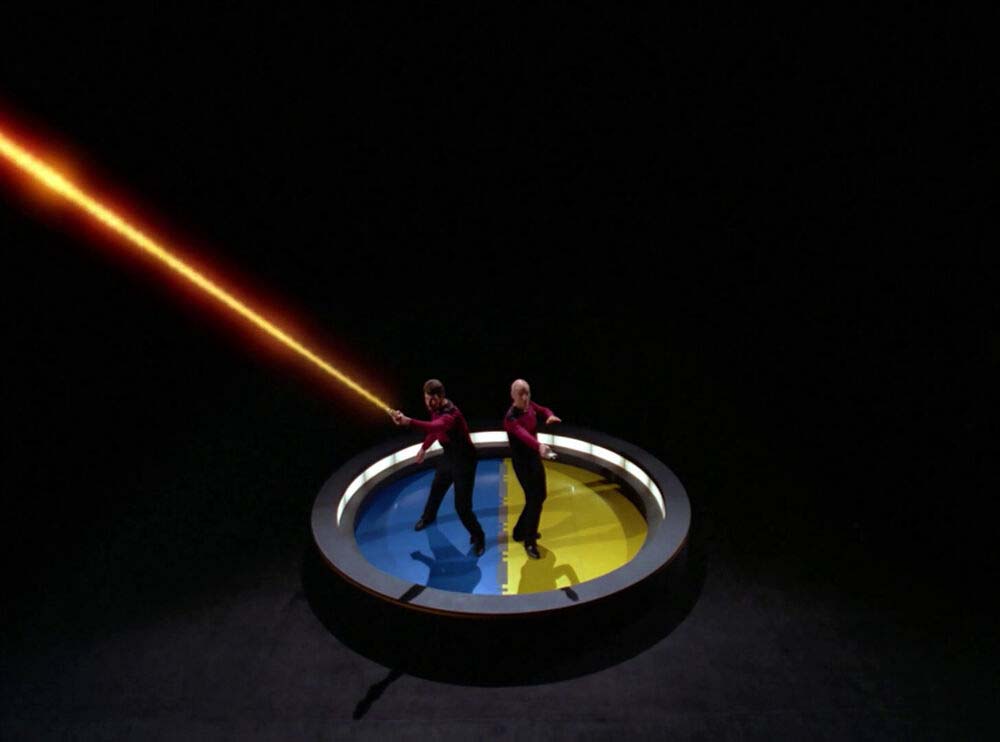 Above – main Phaser Range on deck 10

Security personnel are required to undergo extensive training in the use of hand phasers and phaser rifles. These are stored in the aforementioned armories, and must be issued to crew by a member of the security team.

The hand phasers currently in use by Starfleet have 16 settings ranging from a soft stun setting right up to total dematerialization of the target. 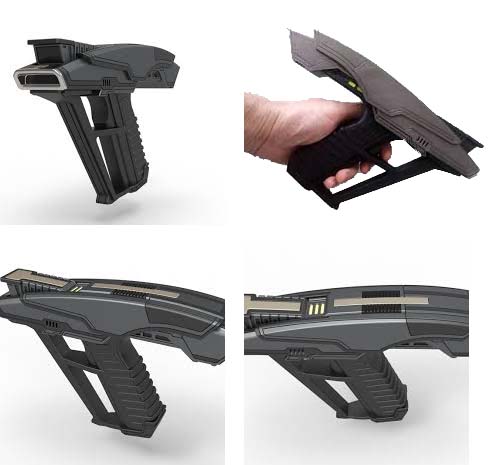 Above – current hand phaser in use aboard the Pharaoh

The armories also store the previous two models of hand phaser, but they are infrequently used: 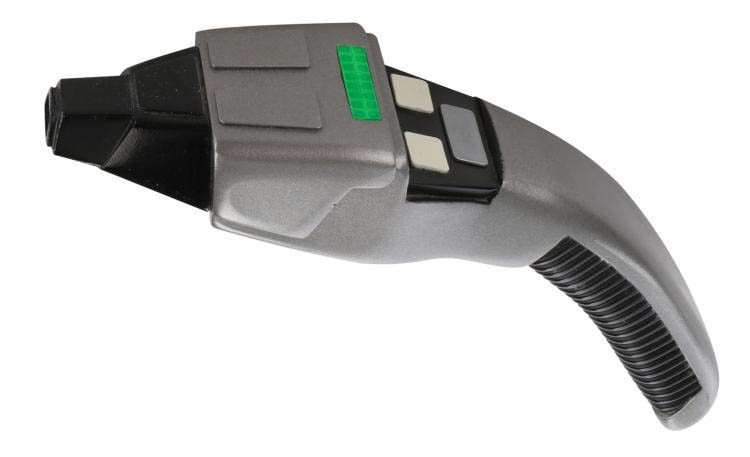 For more testing situations, the phaser rifle is the ideal choice. It is far more powerful than the smaller units, has a greater range, and far more accuracy. There are a number of types of phaser rifles kept in the armories aboard the Pharaoh: 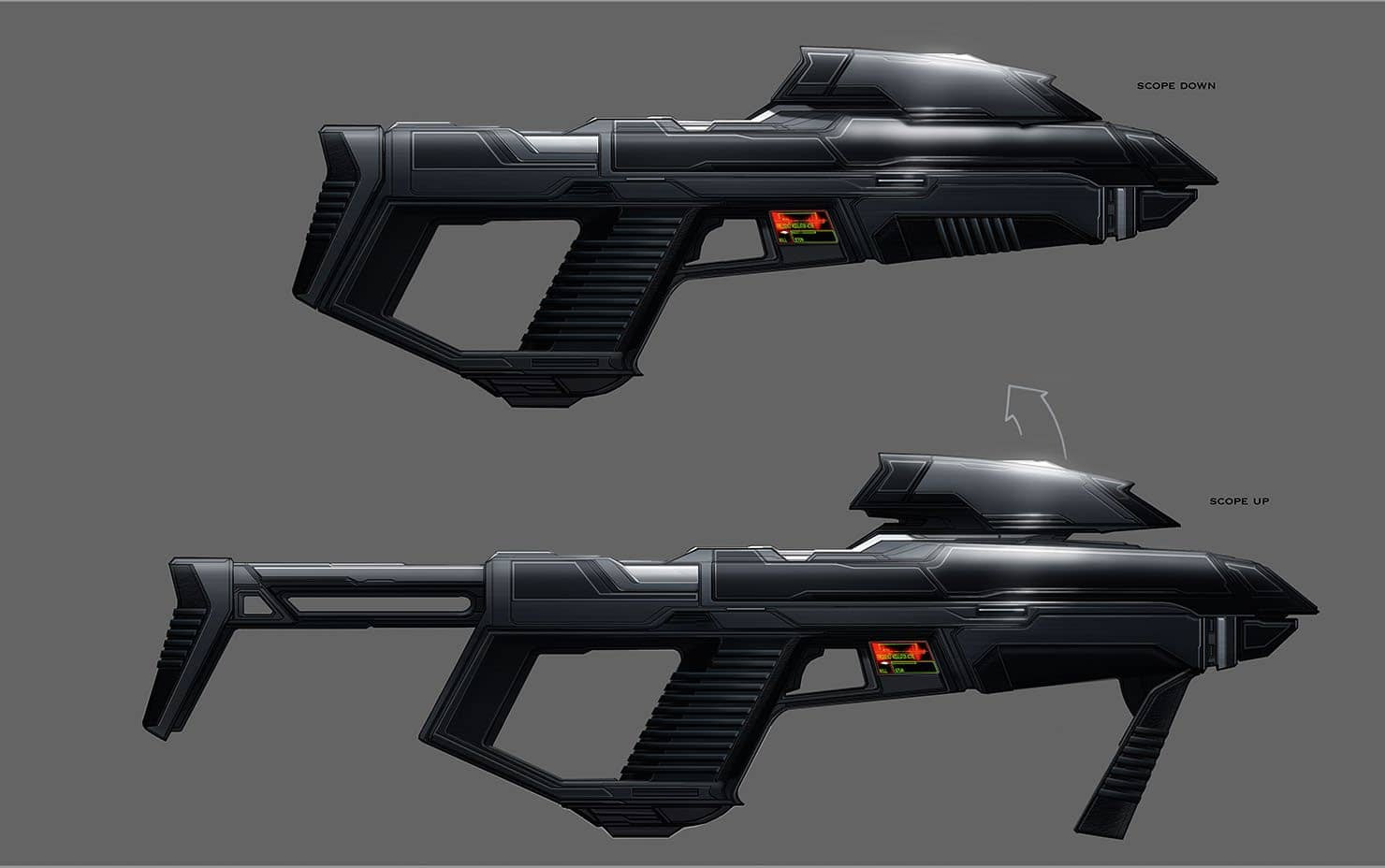 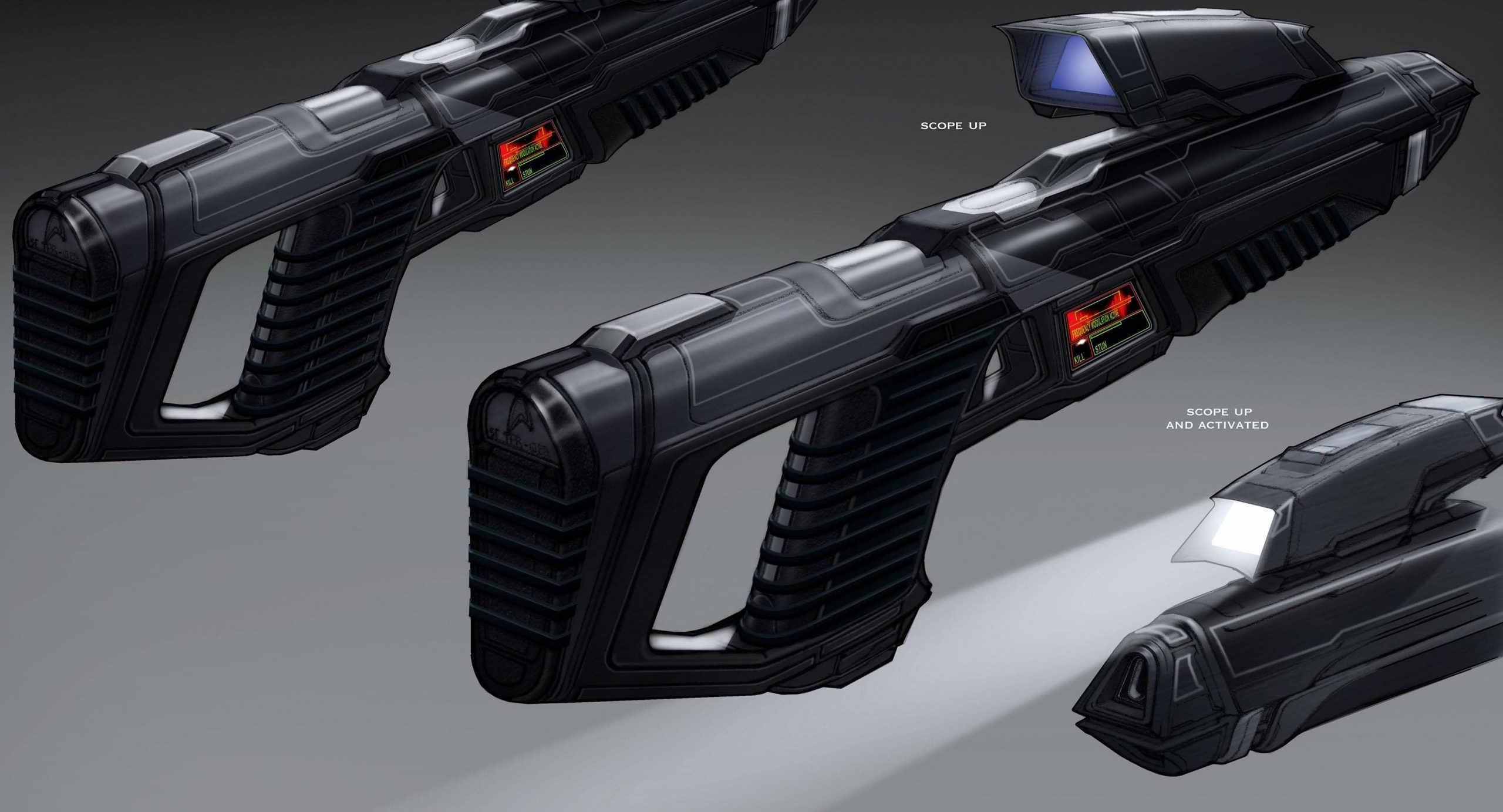 Above – Previous model (still in use)

Above – previous model variant (still in use)

For more demanding situations against a powerful adversary, Starfleet security officers have the Isomagnetic Disintegrator in their arsenal. This is a large portable energy beam weapon, and requires extra training by the operator. A flip out sight can be seen in the image below allowing very accurate aiming: 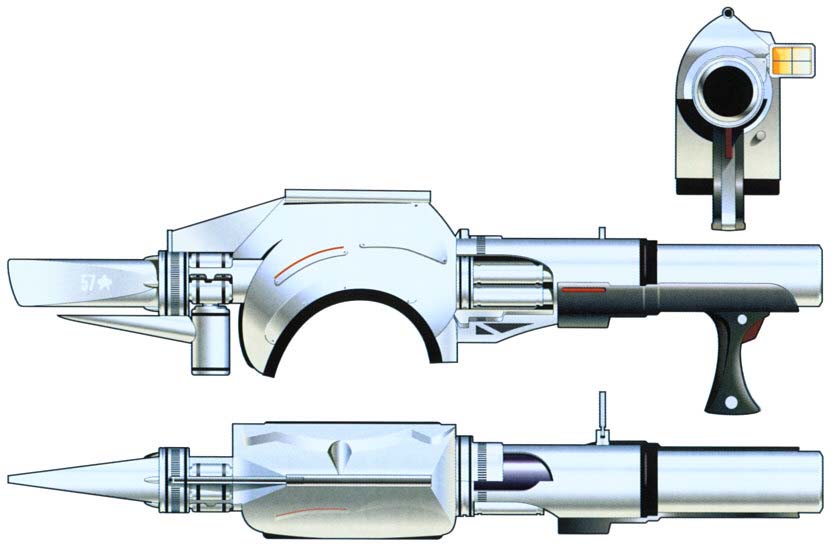 To allow security officers to use the main ship phasers and torpedo launchers, and to ensure that the duty bridge security officers can monitor all onboard and off-ship tactical conditions, there are two dedicated tactical stations on the main bridge. Having the two stations allows the security staff to perform multiple tasks, and is especially useful in a battle scenario where many tasks need to be performed very quickly.

Above – Bridge tactical stations 1 and 2 (either side of the Command seats) are identical, but can be reconfigured for specific requirements

The Pharaoh is equipped with 16 mk. 12 phaser emitters positioned across the hull ensuring no “blind spot”. 9 of these emitters are on the dorsal side, 7 on the ventral side. These powerful energy beam weapons can cause severe damage, especially when used in a sustained burst.

In addition to these phasers, the Pharaoh has 10 torpedo launchers capable of firing all types of Starfleet torpedoes, and can be used to fire a single torpedo, or multiple torpedoes as a rapid-fire arrangement, shooting 5 torpedoes per second. There are 3 single tubes and 1 double tube both fore and aft. The launcher on deck 13 (fore) is capable of turning 30 degrees in either direction to allow a broader area to be targeted.

Photon torpedoes are projectile weapons, and as such can be used anytime, including when at warp. Photon torpedoes use shaped charges of antimatter that, when they come in contact with conventional matter or hard energy barriers, release massive amounts of gamma ray photons, hence the name. The explosive output yield of a mark 6 photon torpedo is set at 25 isotons, but can be adjusted up slightly if required. 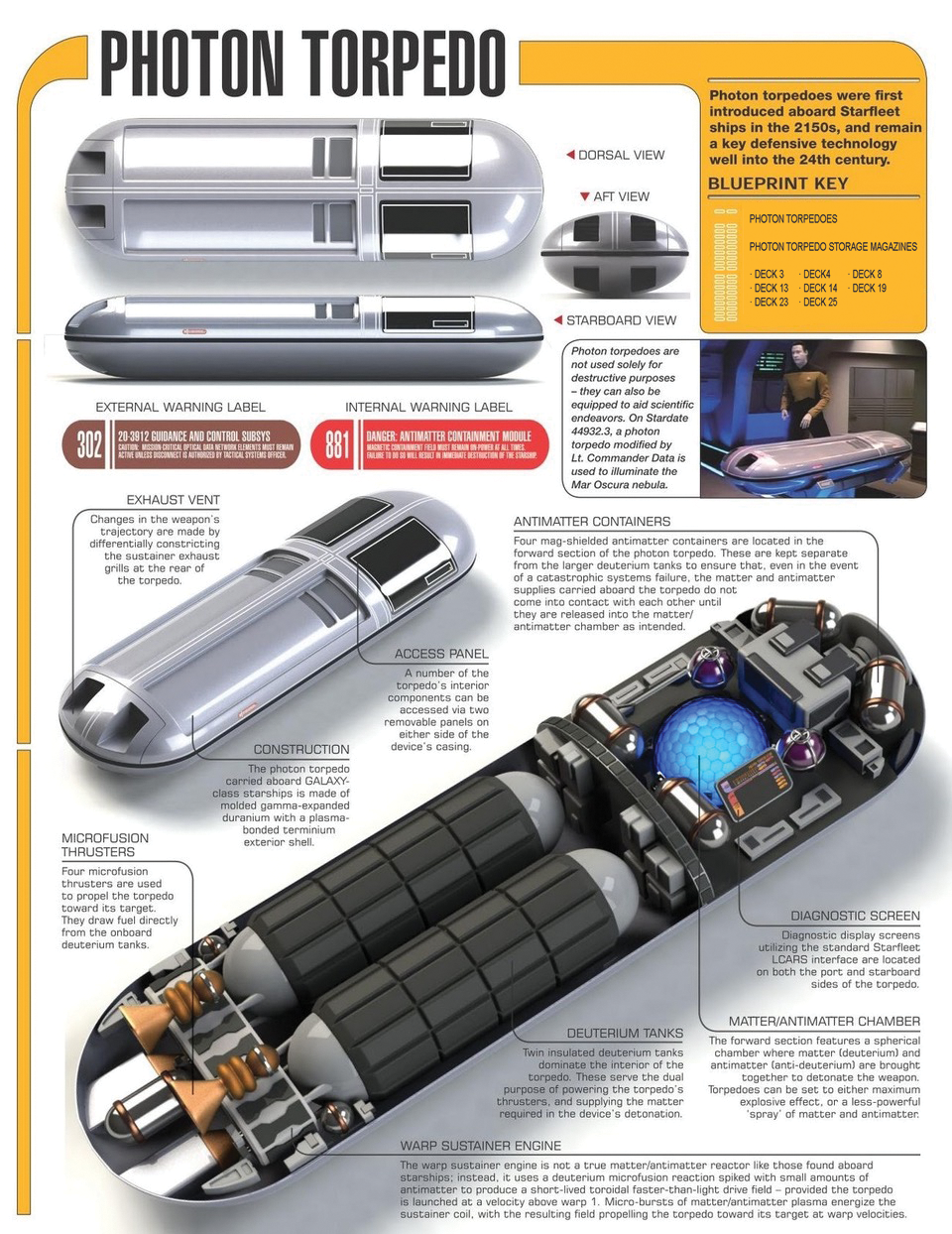 Quantum torpedoes are projectile weapons, which utilize a zero-point energy reaction to create a 50+ isoton explosion. Current quantum torpedoes give an explosive yield of 52.3 isotons.

The transphasic torpedoes work by delivering a subspace compression pulse existing in an asymmetric superposition of phase states. If one subcomponent of the pulse is blocked by shielding, enough others will still succeed in penetrating to the target to ensure that the majority of the pulse is still delivered. Each torpedo’s transphasic configuration is different, randomly generated by a dissonant feedback effect, so there is no way for the Borg to predict the configuration of its phase states in order to shield against them. This type of weapon is particularly useful against an enemy who may have very powerful shielding or multiple layers of armor.

The Pharaoh also has 2 phaser cannons located on deck 12 (fore) and 22 (aft). These specialist phaser emitters can fire short, more powerful bursts of energy, and are useful for repeated fire on a more powerful adversary, punching a hole through enemy shielding.

When the ship is put on red alert, all 3 duty shifts must attend their stations, and the security personnel are sent throughout the ship to maintain the safety of the crew. 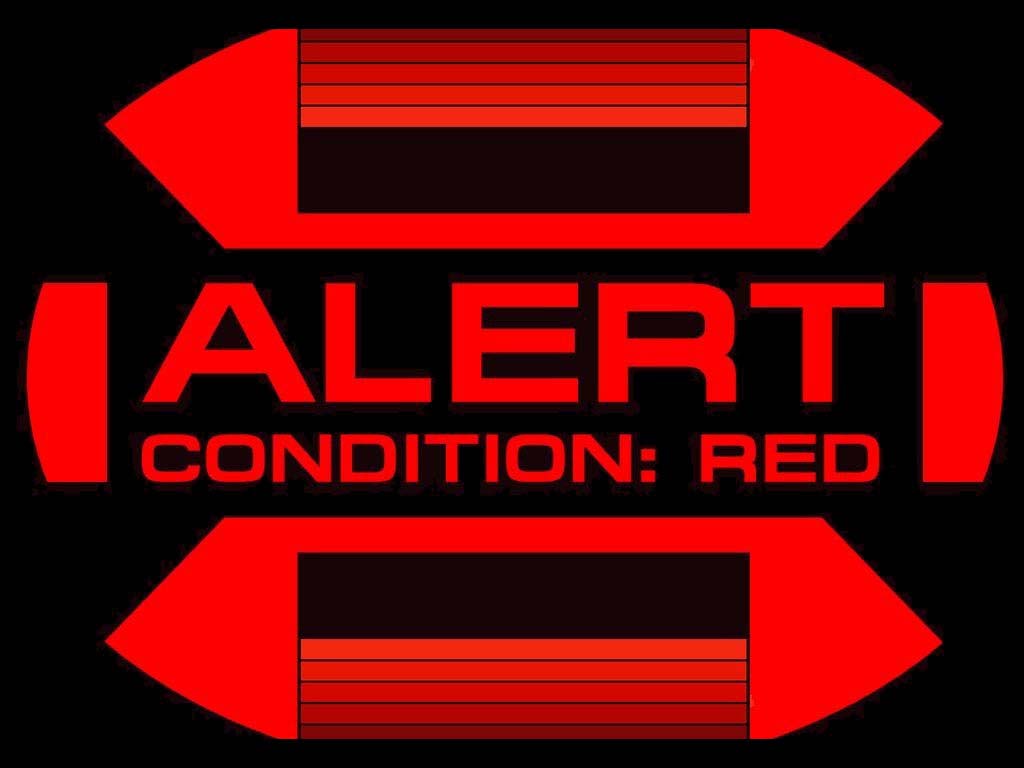 Red alert is invoked during actual states of emergency in which the ship and/or crew are endangered, or there is an immediate impending emergency or combat situation. All security personnel are well trained, and know what their precise role is in any alert scenario.

Another security specific alert condition is General Quarters. This is invoked when an intruder or intruders are detected aboard the ship. The level of General Quarters can be set from 1 to 4, with level 4 being the highest, most dangerous threat. All security personnel have specific duties to undertake in these situations, and an increased security presence is required throughout the ship.